Vita is a recurring character on the television series Raised by Wolves. She is portrayed by Ivy Wong.

Vita was among the children who were kidnapped by Mother when she stormed the Heaven's Ark and killed most of the adults aboard, in retaliation against their efforts to separate her from her son. The youngest of Mother and Father's newly expanded family, Vita currently lives on Kepler-22b with Campion, Paul, Hunter, Tempest, and Holly.

Ivy Wong will play Vita, the youngest member of the family, but also the most fearless.[1]

Precociously perceptive, Vita is often frustrated when not taken seriously, or dismissed. She seems to have a strange connection to her Gen-1 sibling, Tally. 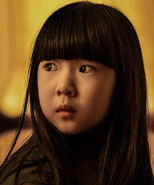