Tempest is a recurring character on the television series Raised by Wolves. She is portrayed by Jordan Loughran.

Tempest was among the Mithraic children who were kidnapped by Mother when she stormed the Ark of Heaven and killed most of the adults aboard, in retaliation against their efforts to separate her from her son. A member of Mother and Father's newly expanded family, Tempest currently lives on Kepler-22b with Campion, Paul, Hunter, Vita, and Holly.[2]

Tempest develops a strong relationship with Mother and Father and sees them as superior to her parents and the Mithraic believers.[1] During the Ark's journey to Kepler-22b, while she and the other colonists were in hibernation, the Heliodromus Otho, a cleric with the church's second-highest rank, was able to awaken prematurely. Otho raped and impregnated Tempest and several other women while they were still hibernating. Although the Mithraic leadership found out about this crime when the Ark reached its destination and the Tribunal sentenced Otho to death, the incident destroyed Tempest's faith in Sol and the church, especially since some told that she should feel honored to bear the child of a Heliodromus. 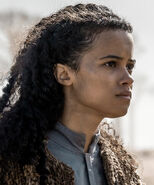