Paul is a recurring character on the television series Raised by Wolves. He is portrayed by Felix Jamieson.

Paul's parents, Marcus and Sue, appear to have been highly neglectful and borderline abusive to him, which left him antisocial, traumatized, and knowing very little about his parents' lives. Thus, when Caleb and Mary assumed the identities of his parents, unbeknownst to him, he did not notice that they were imposters.[1]

After Caleb and Mary discovered that his real parents were neglectful, they decided to do better than the real Marcus and Sue, and raised him thereafter with love and affection, reversing years of psychological damage and allowing Paul to get to know his, unbeknownst to him, new parents.[2]

Paul was separated from his adoptive parents when Mother stormed the Heaven's Ark and killed most of the adults aboard, in retaliation against their efforts to separate her from her son, Campion. She then kidnapped five children, believing that their parents were dead. A member of Mother and Father's newly expanded family, Paul currently lives on Kepler-22b with Campion, Vita, Hunter, Tempest, and Holly, though his parents, unbeknownst to Mother, survived her attack and are searching for him.[2]

Felix Jamieson (Game of Thrones) will play Paul, Sue and Marcus’ 12-year-old son, a boy of unshakable faith in both his religion and his father. Having always felt like an outsider back on Earth, Paul strikes up a complicated friendship — and rivalry — with Campion. Though the two young men begin to learn from one another, they also begin to challenge one another.[3]

Paul faced years of neglect and abuse from his parents, hardening him and causing him to feel like an outsider in the world. He slowly began to open up when Caleb and Mary assumed the identities of his former parents and made a deal to be better parents than their predecessors, showing him love and compassion and teaching him how to play. On Kepler-22b, among his new siblings, he strikes up a complicated friendship and rivalry with Campion, the de-facto leader of the group. 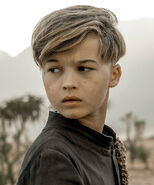