Hunter is a recurring character in the television series Raised by Wolves. He is portrayed by Ethan Hazzard.

Hunter was among the children who were kidnapped by Mother when she stormed the Heaven's Ark and killed most of the adults aboard, in retaliation against their efforts to separate her from her son. An older member of Mother and Father's newly expanded family, Hunter currently lives on Kepler-22b with Campion, Paul, Vita, Tempest, and Holly.

Hunter was the son of a high-ranking member of the Mithraic, which gave him significant social status in the eyes of his peers and inflated his ego. When his father was killed by Mother and the life he had become accustomed to, collapsed, he struggled to transition to living like the others.

Ethan Hazzard (The Long Song) will play the highly intelligent Hunter, age 17. His father was a high-ranking member of a powerful religious order back on Earth. But now that the hierarchy he once sat atop no longer exists, Hunter must learn what it’s like to be just like everybody else.[1]

Hunter is arrogant. He encourages the others to run away, but he is unwilling to leave by himself. He truly believes that his father's rank in the religion allows him to boss others around. He fails to see that the others are seeing the chink in his armor. 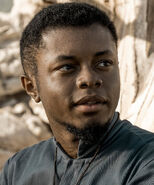