Mother: "Now, let's continue our dinner without any further conflict. We will engage in polite conversation."
Father: "Perhaps you'd all like to hear..."
Mother: "Not jokes! Polite conversation. Holly, please choose a topic."
Holly: "Oh, okay. Uh, Tempest, I was wondering what you're going to name the baby."[1]

Holly is a recurring character on the television series Raised by Wolves. She is portrayed by Aasiya Shah.

Holly was among the children who were kidnapped by Mother when she stormed the Heaven's Ark and killed most of the adults aboard, in retaliation against their efforts to separate her from her son. A member of Mother and Father's newly expanded family, Holly currently lives on Kepler-22b with Campion, Paul, Hunter, Tempest, and Vita.

Aasiya Shah (Call the Midwife) will play Holly, 15, a burgeoning warrior who is trying to find her place in this strange new world.[2]

Whereas several of the other children abducted by mother have assimilated well, Holly is prone to distrusting androids and atheists due to her strict Mithraic upbringing. She is not shy about voicing these opinions and will do seemingly anything to return to her former lifestyle, including abandoning her friends. 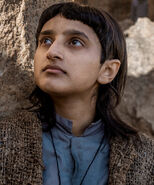