Sunu Gonera
Good Creatures is the thirteenth episode of HBO Max's science fiction drama television series, Raised by Wolvesand the third episode of the second season.[1] It aired on February 10, 2022.

Using his mysterious new powers, Marcus rescues a group of Mithraic prisoners, while Mother discovers the serpent is not a maneater but an herbivore. Father works through his frustration over Mother’s decision to spare the serpent’s life by engrossing himself in his work project, the regeneration of an ancient android.[1]

Mother is on the hunt for the giant flying serpent. With an enormous gun strapped to her back, she ventures across the great expanse. Only, she winds up running into Father and his band of sacrificial lambs.

Father urges her not to take any unnecessary risks, pointing out that the children (and himself) care deeply for her. After contemplating these words, the pair go their separate ways in search of the creature. But they’re not alone though.

Marcus and his new believers are also on the hunt, having commandeered a tank and sending out a piercing sound-wave to try and lure the serpent in. As fate would have it, it’s Father who’s lured in.

Marcus stops the tank and stands before him, seeing the believers and urging him to let them go. Marcus tries to encourage him to turn onto their side, but instead Father knocks him down.

Marcus isn’t the same man he once was, and he manages to get back up and knock Father down, piercing his skull with the spear Father was carrying and managing to bring in the sacrifices as his new band of Mithraics. Marcus’ ranks are growing although Lucius spits in Marcus’ face and refuses to join him.

Paul and Campion arrive at the cave with Vrille, where they find the sigil of Sol and realize that she’s part of Marcus’ group. Paul is concerned, and urges Campion in vain not to tell Vrille anything. When Marcus and his group return, the two children hide behind a rock.

Meanwhile, Mother runs into the Trust who aren’t pleased with her destroying their trap. She believes the Serpent is atop the mountain and intends to go up there and kill it. Interestingly, the soldiers intending to get her into trouble are given instructions from HQ to head up and join her.

It’s a tough climb but Mother eventually heads up alone, during the toughest vertical ascent, and she eventually makes it to the summit.

When Mother finally comes face to face with the creature, she drops the gun and kills a nearby bird, offering it up as a sacrifice to the serpent. It turns out the creature is actually a herbivore and not lusting for blood after all.

While this is going on, Father is brought back from the brink by his children. As it turns out, Mother has decided not to kill the creature after all and is keeping it safe in a cave nearby.

When the Trust find out, they’re not exactly happy. Father too is equally displeased and confronts Mother about her choice. Moreover, the creature can’t withstand the acidic water, given its scales and biology, so it seems like there’s something else that killed the colonists. The serpent was just in the wrong place at the wrong time. Father likens it to a parasite but Mother urges him to see her way of thinking.

Meanwhile, that strange corpse Father previously found, he has now managed to bring the bones together to form a skeletal outline and starts using his own fluid to bring it back from the brink.

For Father, he sees this as a way of giving life and it seems to work too.The strange skeleton slowly starts to reform, and Father continues to use fuel and fix it up to how it was before.

On his quest for fuel, Father winds up fighting in a battle arena against a guy called Billy. This happens to be an Industrial, who’s an elusive and dangerous fighting machine. With a chainsaw attached to one arm and a minigun on the other, it seems like a rather unfair fight.

That is, until Father uses his ingenuity to destroy the android and win the fight. Cheers all round; Father bathes in the adoration of the crowd while also bagging himself a good deal of fuel too.

Meanwhile, Paul is interrogated by the Trust. With the strange orb showing up and echoing his voice across the room. Paul confirms he still wants Marcus dead. As he’s shown his mouse, Paul is urged to speak the truth.

Interestingly, Paul lies and claims he hasn’t had contact with Marcus. It seems to work, as the Trust confirms that there’s a search and destroy mission due to take place in less than 24 hours’ time. However, Paul’s mouse begins acting a little strangely, and it’s theorized that it may have a brain chip installed in it.

The kids are soon given their tasks in the morning but Paul is not in the mood for working. He warns Campion and Holly about the onslaught coming Marcus’ way and believes they should warn Vrille.

From afar, they watch Marcus’ kindness as he hands out fruit. Paul is spotted by Marcus though and encourages the kids to join them. 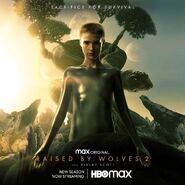 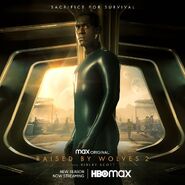