Lukas Ettlin
Feeding is the seventeenth episode of HBO Max's science fiction drama television series, Raised by Wolves and the seventh episode of the second season.[1] It aired on March 10, 2022.

A reeling Marcus and Paul join forces with Mother to disarm the newly weaponized serpent before it wreaks unimaginable havoc.[2]

Paul hauls back numerous fruit from the new tree. As the tribe members gather and begin collecting it up, trying what’s inside, Paul turns away and hurries back to Marcus. He’s convinced that this fruit is going to help people “see the light” and come around to their way of thinking.

Meanwhile, Father catches up with the other children. They’ve modified a D-7 surveillance drone to head under the acid lake but there’s an unexpected surprise in store for them. One of these creatures has been captured and killed. Tempest takes a knife and begins digging into its flesh, desperate to see if the baby is inside. It’s not, as it turns out, and the drone’s signal is soon lost after a brief stint underwater.

However, Vrille happens to pick up the drone by the shore, having got herself back to working order, although she happens to sport a mask over her face. When the others see her, Vrille reassures then, claiming her earlier bout of violence was simply self-defence but the kids aren’t so sure. Interestingly, she has seen Tempest’s baby, which is still alive. According to Vrille, it’s located in a sea cave 10 miles down shore.

Mother flies across and notices the tree, immediately touching it and realizing it’s linked to Sue. She exhibits concerns and flies back, telling the other colonists not to eat the fruit. After all, it could be poisoned.

However, mighty banging culminates in the great serpent breaking free from its cage and flying through the air toward the tree. As it flies, a radio signal crackles through on Marcus’ radio, who happens to be there with Paul. Two words bleed through “Burn me.” This seems to be Sue reaching out, and as the branches extend, the serpent swoops down and eats the tree, evolving further by sprouting monstrous tendrils across its body.

Mother flies up and uses her powers against the serpent but it doesn’t work. Instead, the Serpent uses powers of its own to send Mother spinning and straight into the ground. As the Serpent flies off, Paul and Marcus decide to take an unconscious Mother to the habitank to recover.

Unfortunately, she was unable to kill the Serpent because of her programming. It’s misidentified the serpent as a child as she gave birth to it, and as such, she’s unable to launch any sort of offense. So the only way to solve this is for Mother to be reprogrammed, with Father and the ancient Mithraic android the potential key to resolving this.

Mother heads in to see the ancient android, who’s hooked up to numerous tubes. Grandmother happens to be a Shepherd, an android created by the Technocrafts to fight against the Believers in the war. Her prime directive is to protect human beings no matter what. The Shepherd theorizes that she could remove her veil and place it on Mother, potentially blocking her caregiving protocols.

Out in the wild, Father, Tempest and the others find the sea creature with Tempest’s baby. Only, it’s docile. In fact, she finds it feeding her child. Tempest forces them to stand down and not shoot. Tempest decides that the choice has already been made for them, believing that there’s no way she can love the child. As she turns and walks away, Hunter shoots the creature anyway and takes the baby back. She tries to hand it to Tempest but she simply walks away.

With Vrille’s spine giving up, the android realizes that she’s about to be signed out as her and Campion walk through the woods together. With her about to be shut down permanently, Vrille scribbles down a bunch of instructions on a tree branch before collapsing. 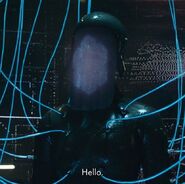